21 Things You Must Know About Atal Bihari Vajpayee, A Former Prime Minister Of India

Atal Bihari Vajpayee, needs no introduction. He is more than a politician. His personality is at par excellence. There are unknown and lesser known facts about the former Prime Minister of India, which one must know to relish the actual meaning of being a politician.

Atal, who born on December 25, 1924, at Gwalior, died at the age of 93 as he breathed his last at AIIMS hospital in New Delhi on August 16, a day after the India Celebrated the 72th Independence Day.

Entire country is deeply mourning the death of the personality everyone wants to follow. He is only adorable and visionary leader of India who was conferred the India’s highest award the’Bharat Ratna’ on March 27, 2015. He is the most revered and beloved politician of India.

Read 21 Things You Need To Know About Atal Bihari Vajpayee 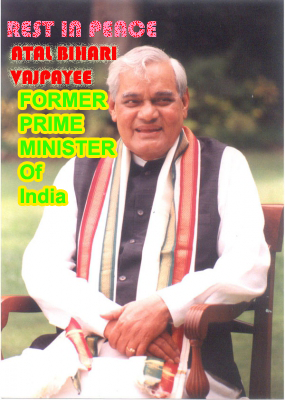 Even during his teenage, he was jailed by the Britishers for opposing the British rule. After surrendering communalism, he joined RSS and then Jan Sangh.

He was so dedicated to the RSS that he was dropped out from school law school to run RSS magazine which actually made him the great voice of Bhartiya Janta Party (BJP).

It is said that Mr Vajpayee pursued the study of law along with his father Krishan Bihari Vajpayee which itself set a precedence of sorts. He even stayed with his father in hostel while studying law.

Vajpayee’s involvement in the Quit India Movement during 1942 to 1945 made him the hero of BJP and the nation too. He even stayed in Juvenile home for several days.

Vajpayee’s participation in the political happenings of BJP made him closer to the BJP’s predecessor Shyama Prasad Mookerjee, founder of Bhartiya Jan Sangh.

Vajpayee’s turned close aide of Mookerjee when he took his side while he was sitting on fast unto death against the ill treatment of Indian citizens visiting Kashmir.

When Mookerjee died due to weakness followed by serious illness, it proved a ‘push movement’ for Vajypayee in political arena, since then he crossed all major hurdled and entered Parliament in 1957. Then from 1957 to 2009, he served in Lok Sabha for 10 times, a record breaking terms in Lok Sabha.

It was the pride moment for India when Vajpayee took the baton of Prime Minister in 1996. From a small town RSS worker, to the chair of PM, it was a like a walk on the cake as he remained in opposition for four decades.

When Vajpayee became PM in 1996, his government lasted for only 13 days, it was unfortunate though as BJP was lacking majority.

He again flipped the numbers and became PM in 1998, here too his fortune was not in his favour, and his government lasted for 13 month only. Government failed to keep majority as AIADMK chief J Jayalalithaa had withdrawn support from BJP, which collapsed the government.

In 1999 When He Again Became Prime Minister of India, Full Term PM

In 1999, Vajpayee led BJP government again came to power and this time, fortune was all in the side of BJP and he became the PM and served the nation for five years. Atal Bihari Vajpayee is the only leader who became the prime minister of India not once, not twice but thrice.

When Mr Vajpayee was the External Affair Minister in the government of Moraji Desai, he was sent to United Nations General Assembly by Mr Moraji where he delivered speech in Hindi which acclaimed him the leader of India and leader of Hindustan.

It Was The Hurraah Movement For Hindustan

What made his place in the peoples of both India and Pakistan was that he traveled in the same bus to meet the Pakistan CM Nawaz Sharif.

Vajpayee was lauded for his pragmatism and he set precedence in the international diplomacy. However the Pakistan despite agreeing for peace and bilateral relationship then, started Kargil war in May 1999.

It is also interesting to share as the tiff over the Kashmir between India and Pakistan is still on. Once the Pakistani minister said, “Kashmir Ke Bina Pakistan Adhura Hai’(Pakistan is incomplete without Kashmir), what our PM Atal Bihar Vajpayee has said, then ‘Pakistan ke bina Hindustan Adhura hai’(India is incomplete without Kashmir). This shows how down to earth or a mature leader he was.

“Every successful man has a woman behind”-this saying does not goes well with Mr Vajpayee as despite being a bachelor, he proved his mettle and shown the world about the power of India. The defeat to Pakistan against Kargil war was one such example.

Vajpayee is the one who boarded a bullock cart(bail garhi) to reach Parliament to protest the rising prices of petrol and diesels. He stole the heart of Indian with his unique kind of protest.

Vajpayee The Only Leader Who Won Elections From Four States Simultaneously

Vajpayee was once such leader in the history who faced defeat in elections only once in his lifetime. He was the one who won elections from four different constituencies Uttar Pardesh, Delhi, Madya Pardesh and Gujrat simultaneously.

The Pokhran Nuclear Test is said to be the major achievement of Vajpayee as it has made India a nuclear power, not only from the aspect of power generation but from the aspect of weaponry, a much needed step to boost the nuclear weaponry power of India after the Kargil war.

For this Vajpayee had faced flak from US and other European country for not keeping them in the loop while doing nuclear tests.

“We have the capacity for a big bomb now. Ours will never be weapons of aggression”a two liner from Vajpayee when facing flak from various international quarters.

When Kargil war started in May 1999, Vajpayee’s leadership proved his worth before the nation who defended the country’s integrity and security at the time of turbulence.

How can an Indian citizen forget the Operation Vijay launched by the Indian Army without crossing the LOC and freeing the encroached territories by the Pakistan like Batalik sector, Toloing hilltop, Drass, Tiger Hill etc.

Hey Its True.. Vajpayee Is The Man Behind Sarv Shiksha Abhiyan

You must be surprised to know that Vajpayee is the one who started the Sarva Shiksha Abhiyan, a right to education for the children from 6 years to 14 years, and an effort to build a literate India.

He is the one under whose guidance Chandrayaan 1 Project opened ways for the India to reach Moon in 2008.

You may be in the misconception that Delhi Metro project was brought by Congress government, let me clear the air here that Vajpayee was the one who passed the project and inaugurated the first line from Kashmiri Gate and he himself boarded the metro then.

Vajpayee Was An Orator At Par Excellence

An orator at par excellence, Atal Bihari Vajpayee penned several poems which are close to the life realities. His health started deteriorating in the late 2000 and when he underwent a knee replacement surgery in 2001, he started living inside the four walls. When he suffered a stroke in 2009, his orator skill suffered a major stroke as stroke had which impaired his speech.

His book, ‘Meri Ekaywan Kavitayan’ was the most loved writing he ever wrote. His orator skills, his chaste hindi, coupled with winsome smile and calculated pauses, had made him the most visionary and illustrious politicians of India.

Atal Bihari Vajpayee was not only the politicians, he was orator, he was a poet, he was human being of par excellence but he was also a well known journalist. He was at cloud nine when his party sent him to monitor the Deendyal Upadhyaya’s newspapers like Panchjanya, Veer Arjun, Swadesh, and Rashtradharma.

When He Said I Want It Back

It was 1977 he was appointed as External Affairs Minister in the Moraji Desai’s government and one day when he was heading to his office in the South Block, he saw that poster of former PM Pandit Jawahar Lal Nehru was missing and he turned so angry that he told the staff, “I want it back” and on the same day, Nehru’s poster was reinstalled.

Despite bachelor, he owns a family.

A PM who Did Not Have Any Opposition From Opposition

DO you know that when UP government was in power in July 2013, it had categorically admitted before the Supreme Court that NDA Government led by Atal Bihari Vajpayee developed half the roads in last 32 years in their 5-year term. Even during his term as PM, opposition hardly gets chance to oppose his work as whatever he used to do, opposition used to accept it by all means.

A Must Read Fact When he forgets that he is PM

When in 1996 he was to moot the confidence motion in the Lok Sabha to form government, he literally forgot that he was himself a prime minister, he started his speech by saying “Respected Prime Minister sir’(Pradhanmantri Mahodaye), and the politicians there had burst into laughters,

Do You This PM Cooks Food For Himself

Atal Bihari Vajpaayi was the one such Prime Minister of India who often used to cook food at his own kitchen. He likes to cook kheer, halwa and khichri.

My motive  of writing this piece is not to express sympathy for the great personality of India, but a heartfelt tribute to the leader who deserve praise, praise, praise ……full of respect. May Atal Bihari Vajpayee ‘REST IN PEACE’ in the heaven.