Home  /  You Must Know  /  Its Official, Kohinoor Was Not Gifted To British, Sikh Ruler Duleep Singh Was Forced to Surrender 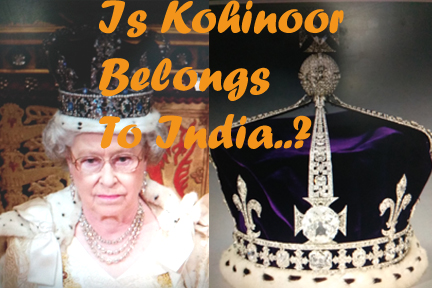 Its Official, Kohinoor Was Not Gifted To British, Sikh Ruler Duleep Singh Was Forced to Surrender

You must have seen ‘Queen Elizabeth’ wearing the ‘Kohinoor’ diamond, one of the expensive jewels in the world. Does this diamond belong to British, of course not?

Its India’s pride and India wants it back from British.

You must know this one of the largest cut 105-carat diamond as a part of British crown jewels, was not gifted to British but was surrendered to the British.

There are many myths and facts about the Kohinoor diamond that this was gifted to the British, and ‘Queen Elizabeth’ was boastful while wearing this diamond thinking that this belongs to the British and India has nothing to do with hit.

But the reality is something else! Kohinoor does not belong to British by the way.

When someone was told to surrender a thing under pressure, it is not called a gift, it is called taking away by hook and crook, says historians of India.

Even the story of the ‘World’s most infamous diamond’ By William Dalrymple Anita Anand clearly states that Kohinoor was not a gift to the British.

Rather diamond was taken away by the greedy Britishers by force. Dalrymple even went on to say in his interviews that it was a symbol of loot of colonial times.

Archeological Survey of India Too Claims Kohinoor Was Surrendered Not Gifted

Contradicting the claims of the union government that the Kohinoor diamond was neither “forcibly taken nor stolen” by British rulers, but given as a “gift” to East India Company by rulers of Punjab, the Archeological Survey of India (ASI) in a RTI reply states that Kohinoor diamond was surrendered by the Maharaja of Lahore to the queen of England.

Pertinently in 2016, the Indian Government had filed the abovesaid reply in the Supreme Court, the highest temporal body of India, which was then hearing the Public Interest Litigation filed by the All India Human Rights and Social Justice Front’, which had demanded that Kohinoor diamond which is the property of India should be returned to India as Britishers has not right to keep the same.

When RTI was filed by the RTI activist Rohit Sabharwal recently, at the Prime Minister of India office, PM office told the Archeological Survey of India (ASI) to provide the information showing the grounds, of which the possession of the Kohinoor diamond was transferred from the Indian country to the United Kingdom.

Whether it was a gift to the UK by Indian Authorities or there was any other reason behind the transfer, he further asked in RTI.

When Archeological Survey of India replies to the RTI, it plainly states “As per the records, Lahore Treaty held between Lord Dalhousie and Maharaja Duleep Singh in 1849, Kohinoor diamond was surrendered by the Maharaja of Lahore to the queen of England”.

RTI further clarifies the extract of the treaty is as under…

“The gem called Kohinoor which was taken from the Shah-Suja-Ul- Mulk by Maharaja Ranjeet Singh shall be surrendered by the Maharaja of Lahore to the queen of England.  Hence the contents of the treaty indicated that the Kohinoor was not handed over to British on the wishes of Duleep Singh. Moreover, Duleep Singh was a minor at the time of treaty”.

When the RTI Activist Rohit Sabharwal was asked by ‘LYF’ blog team that why he filed an RTI when the diamond is already in the possession of the British from years.

He replies, “I recently visited England where I visited London Tower to see the Kohinoor diamond where I met one of the British national who claimed that Kohinoor was not forcibly taken from India but it was gifted to the queen of England by Maharaja Duleep. I had an argument with the Britisher that it was not gifted”

Activist furhter adds, “Since that day, I decided to go deep into the subject to trace in what circumstances it was transferred to the Queen of England. I filed RTI to ASI and their reply astonished me as RTI cleared that it was not gifted rather was forcibly taken by Britisher”

Sabharwal said RTI reply clearly states, it was surrendered, and one can make out a difference between surrendered and a gifted thing.

Chairman of Maharaja Duleep Singh Memorial Trust, Kothi Bassian (Raikot) said, “This is exactly what we are saying from the past several years that diamond was taken away by British rulers from Maharaja Duleep Singh when he was only 9 years old and when he grew young he had written letters to Queen of England for returning the precious gem.”

Where Is This Indian Diamond Is Lying At Present

At present this diamond is lying at Jewel House, in Tower of London. Not only India, even the others counties, like Pakistan, Afghanistan, Iran has also time to time demanded this expensive back from the British as they too claim their ownership over this world’s expensive jewel.

From where this diamond was found

Sources maintained that the diamond is also called Koh-i-Noor(Persian for a mountain of light) is a large, colorless diamond which was reportedly found from Golconda region near Guntur in Andhra Pradesh, India in the 13th century.

Initially, its weight was 793 carats and over the centuries, it was reduced as it was cut several times. Its present weight is 105 carats.

The exact value of the gem is still unknown to the world, however, it is estimated that it can be around 10 to 12 billion dollars.

How it lands in the hands of British

Historians say that after the subjugation of Punjab in the second war in 1849, the last Sikh ruler of Punjab Duleep Singh was then ordered by the governor-general of India, Lord Dalhousie to personally handover the gem to the British Queen.

Queen had later cut down the gem to 108.93 carats. When queen died, British decided to set the Kohinoor in the crown of Queen Alexandra, the wife of Edward VII and it was seen at their coronation in 1902.

Interestingly, at the death of Queen mother in 2002, historians claimed that this world’s expensive gem was placed on the top of her coffin.