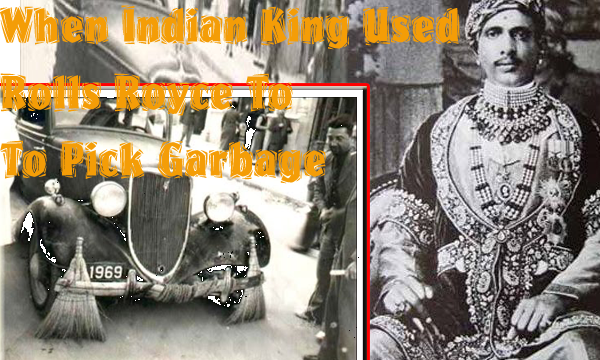 YOU must be knowing about the world ‘s leading car manufacturers, Rolls Royce and it’s penchant among the elite class. An Indian king Jai Singh Prabhakar once penned down history when he made these cars to pick garbage and clean Indian roads.

Seems an out of the box thought!.  But it’s very well true.

LoveYouFamily.com blog is set to going down the memory lane to refresh your memories about an interesting incident that happened way back in 1920.

In 1920, the king of Alwar, in Rajasthan Jai Singh Prabhakar, went to London for vacations. He was the wealthiest king at times and his Royal lifestyle was an eye of attraction.

One day, leaving aside his Royal lifestyle and affluent look aside he went to take a round of the Bond Street ‘incognito’. At that time he was not wearing any expensive apparels, sparkling attire which kings used to wear and he went without his royal fleet as well.

While walking down the street wearing casuals like a layman, he came across the showroom of the world’s expensive and luxurious cars of that time ‘Rolls Royce’.

Curious to enquire about the super looking luxurious and royal cars ‘Royal Royce’, he entered the showroom.

Showroom employees were gazing at the king thinking that a poor man or a middle-class man came to the showroom to waste their precious time. But the company employees were not aware they will soon bear the brunt of humiliating the Indian King.

The moment king Jai Singh politely asked the salesman about the specifications of the car and price, salesman insulted the king and told him to leave.

King again tried to seek details of the car, he was again humiliated by company employees.

King went to his hotel and asked his staff to call the company officials and told him that the king of Alwar is visiting their showroom to buy Rolls Royce cars.

Now the same casual wearing ‘Maharaja’ Jai Singh was visiting the showroom as a real king with the appearance of king, royal cavalcade and security.

The moment king reached the showroom, he was surprised to see the red carpet rolled down for his welcome by the employees of Rolls Royce. He got a warm welcome from the staff.

Same employees who had once humiliated the king and had refused to share the details of the cars thinking that he was a poor man were now lined up for the hospitality of the Indian king Jai Singh.

King gave all the money in advance including the delivery cost. Company officials were on the cloud nine as their all cars were bought by the king in on go.

The company was literally celebrating as they got the bulk order from the Indian king Jai Singh.

As king flew back to India and six Rolls Royce cars also reached India in a few days.

King was already filled with anger and the moment cars reached India, instead of adding these cars to his Royal fleet, he called the municipality officials and handed over all the six cars to them.

He told the municipality men to use these cars to pick trash and garbage. King had then categorically instructed the officials to make maximum use of these cars for garbage picking.

In no time, news of Rolls Royce being used for garbage collection spread like jungle fire in the entire world. The company recorded a sudden decrease in the sale of cars worldwide.

When company officials came to know the cause of king Jai Singh’s revenge, they decided to achieve compromise and sent a telegram to king seeking apology for the humiliation he was subjected to a company showroom in London.

The company bowed down in front of the king and urged him to stop using cars for garbage picking.

Thinking that lesson was taught to the Rolls Royce company, king Jai Singh accepted the apology and called back all cars and put all of them in his Royal fleet.

Happy over the king’s behaviour, the company gifted six more Rolls Royce cars to the king for free.

Once in the year 1930 king Bhupinder had ordered brand new Rolls Royce but the company had refused to fulfil his order.  Feeling insulted over the company’s refusal,  the king ordered to put his old Rolls Royce for garbage, filth and cow dung collection in Patiala. Seeing the adamant attitude of the king, the company acceded to the king’s demand.

Similarly, there was another account, the king of Bharatpur who had a fleet of Rolls Royce once developed a technical snag.  When he asked the company to send mechanics immediately, the company refused. Infuriated over the denial attitude of the company, like the king of Alwar, he also decided to use Rolls Royce as a garbage picking vehicle.

Again the company had to bow down in front of the Bharatpur king and sent mechanics to repair the cars.