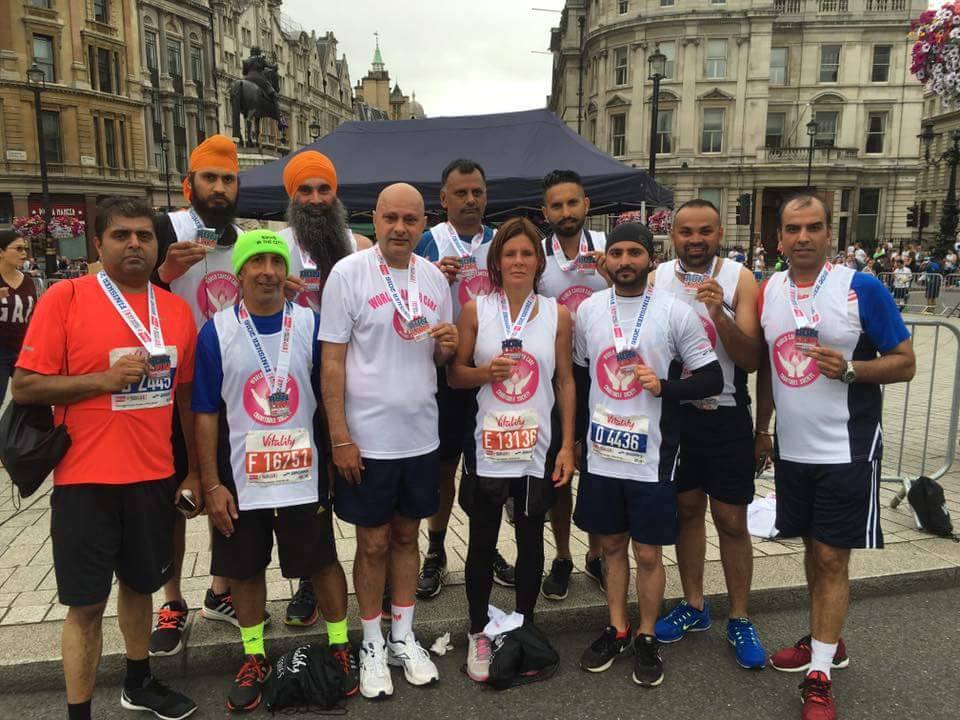 From the ‘LYF’ Desk

Meet Mr. Kulwant Singh Dhaliwal, an Indian-Origin UK businessman, the only aim of whose is now the eradication of cancer from the world. He is a ‘Global Ambassador’ of registered charity ‘World Cancer Care’ spreading awareness and helping thousands to fight against Cancer.

The day this gentleman lost his mother to the chronic disease ‘Cancer’, he pledged to not let anybody’s mother die of Cancer.

Yes, he saved numbers of mothers and others from being falling prey to the disease.

If unfortunately, anyone falls prey to the disease, he’s helping them to fight and win over.

The day his mother breathed her last, he took an early retirement from his well-settled business in the United Kingdom with the only motive to devote his rest of the life for the eradication of cancer, a deep-rooted disease in the society.

Hailing from a small town of Punjab (India), Moga, Dhaliwal was born on May 10, 1958, in Bir Rauke village. After he completed his graduation from the DAV College Jalandhar, he went to the abroad United Kingdom.

The day he emigrated to the UK, he was just 27 years old. Toiled hard in the foreign land, he set up his business and rose to the heights bringing laurels for his native land Punjab.

Dhaliwal was always eager for the service of mankind since his childhood.

In 1991, he set up Sant Singh Dhaliwal Trust in 1991 in the name of his father to raise voice against the female foeticide, the adolescent marriage of girls and lack of educational resources available for poor.

Since Dhaliwal was already concerned about the social evils or any sort of issues affecting the mankind, the day suffered a huge blow when his mother died of cancer and even his father in law too fell prey to the disease, he decided to stand against the disease like a mountain to save the mankind from this blot.

Despite Dhaliwal was busy with his well-settled business, he decided to take early retirement from his business when he was 47 and thereon he has been spending every second of life for saving the people from Cancer.

Impressed by the determination and his thoughts for the mankind, Dhaliwal was selected as a brand ambassador of ‘World Cancer Care Society’ in 2014.

You will be surprised to know that Mr. Dhaliwal has not been taking a single penny from the ‘World Cancer Care’ despite he has been devoting every minute of his life for the purpose. He has added so many feathers in his cap by winning national and international awards as appreciation for his service to mankind.

A Must See Video On Cancer Facts Around The World 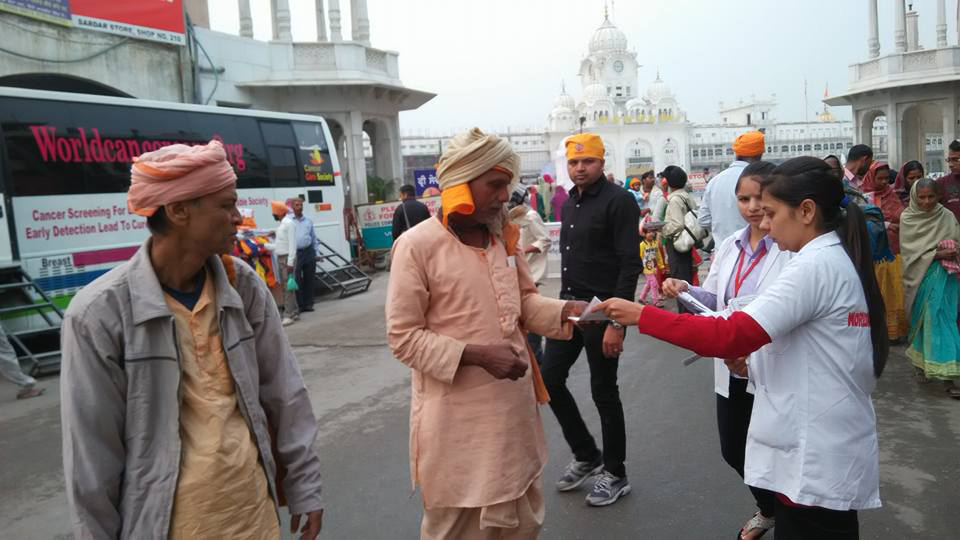 In England, where the population is 7 crores, daily 980 cases are being detected which is a serious concern.  This has been said by Dhaliwal in his address during a program in Canada.

Dhaliwal claimed that compared to the entire world, most deaths due to cancer are taking place in Punjab. Punjab is also called a world cancer capital.

He claims 43 deaths are daily taking place in Punjab, out of 43, 36 ladies are dying due to breast cancer and cervix cancer. The important fact is that these two cancers are curable only if you detect it earlier may be at the first stage.

“Cancer enters into the second and third stage from the first because Punjabi people go to the Tantriks, who are not letting the people cure cancer. Alarmingly media is also publishing the adds of these tantrik (occultist) in newspapers. Luckily the UK and Canada government are not allowing these adds to be published in media there. Believe me, the only cure of cancer is early detection and prevention, nothing else. It is well said by someone, “Prevention is better than cure” Dhaliwal said while interacting with the media persons in Ludhiana, Punjab recently.

He while setting a satire on the Punjabis said that every fourth Punjabi is suffering from diabetes and every gurdwara is offering sweet ‘jalebi’ in its langar(a communal free kitchen), it’s illogical totally. “Sikhs have meddled themselves in the langars but there is a need to distribute langar of medicines to save the generation.

“We need to change the direction of donation including clean water, education, and medicine, ”Dhaliwal said.

Punjab has 12783 villages, and our world cancer care did 8200 checkups. Special buses from England have been sent to Punjab.

“We are checking cancer on roads, including breast cancer, cervix cancer, prostate cancer, oral cancer, and throat cancer, with a waiting list of only 15 minutes. Daily we are checking 25 villages and are giving a report to the United Nations.”.

Guru Arjun Sahib had opened hospitals but Punjab has opened gurdwaras Dhaliwal said adding that Punjab has 12783 villages but it has 33000 gurdwaras and on an average, 3 gurdwaras in every village. Guru Sahib had told people to do service of humanity but people are straying from the real path.

Why Need Camps In Rural India 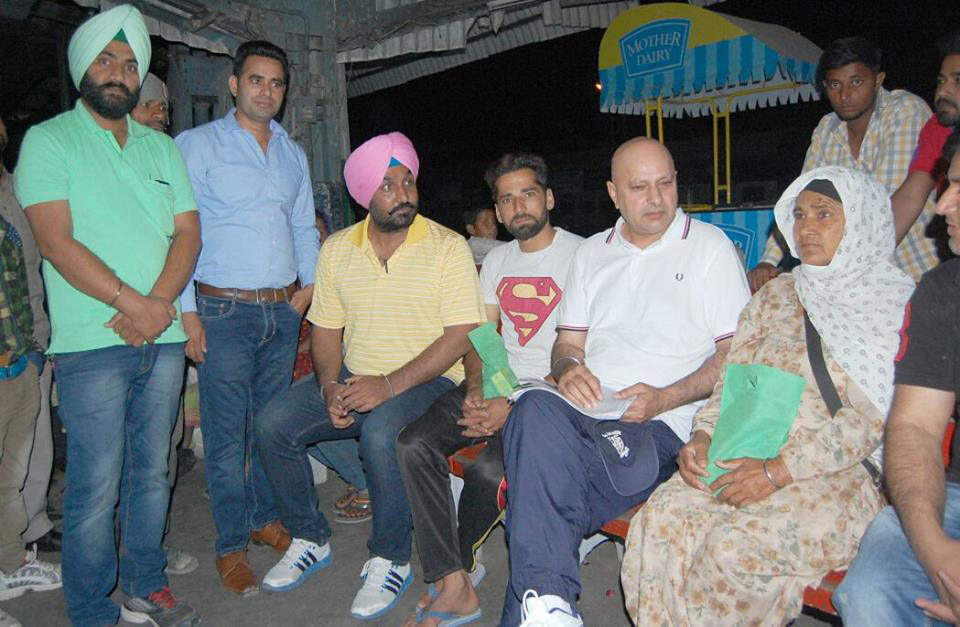 With the increase in a number of cancer cases in India, the number of Cancer Centres with excellent infrastructure and trained Doctors is also increasing in urban India. However the same is not true about rural India.

As per the www.worldcancercare.co.in this is reflected in the fact that, nearly 70% of Indian population lives in rural India. However, nearly 95% of cancer care facilities are in urban India. Thus, though the incidence of cancer in rural India is nearly half of that of urban India, the mortality rates are double.

If cancer care facilities have to be improved in rural, more Camps have to be developed in smaller cities and in rural India.

There are no any cancer awareness, early detection and early diagnosis in rural regions. Even the majority of people unaware form Cancer Early Symptom.

By the time, the patient can arrange the logistics to go to cities for diagnosis and Treatment; it causes further delays in treatment and advancement of the disease.

All this leads to the vicious cycle: Because these patients come with advanced disease, the outcomes are poor; and because of poor outcomes, other rural patients are not motivated to take proper treatment on time.

If this vicious cycle is to be broken and cancer awareness, early detection has to be organized for the rural patients at their doorsteps, in their familiar environment then survivor rate can be improved.

Another reason why Cancer, not timely diagnoses because Cancer Diagnoses is becoming more expensive day by day, the series of expensive investigation are out-of-pocket from patients.

It would be very important to organize a free cancer screening program through the mobile campaign in the rural area so that patients getting the highest quality of cancer care at their doorstep.

We all want to win the cancer war however it cannot possible by any alone, we need your kind of support how to help us time to time so that we focus on creating cancer awareness and prevention. Simple cost-effective methods have been developed for early detection and Cancer Awareness.

Why Early detection is Important 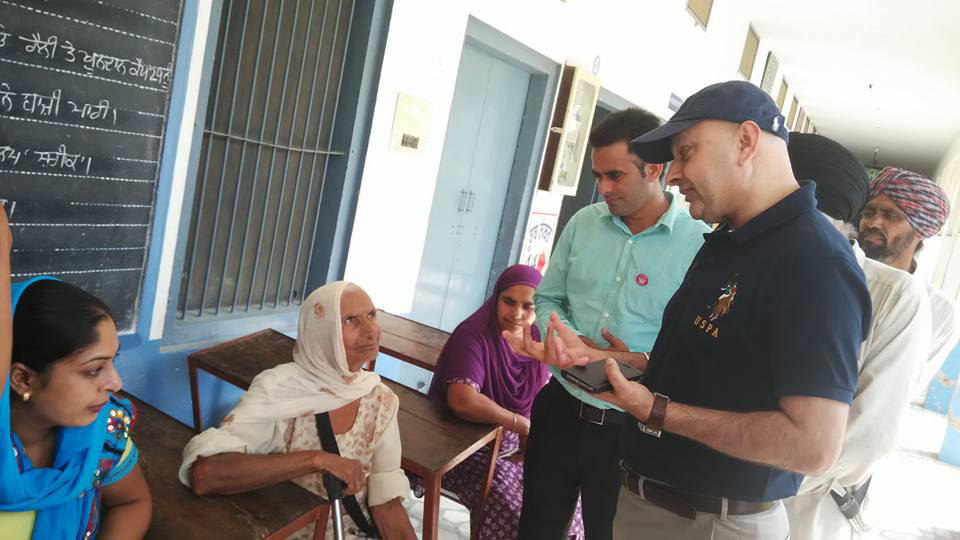 Some early signs of cancer include lumps, sores that fail to heal, abnormal bleeding, persistent indigestion, and chronic hoarseness. Early diagnosis is particularly relevant for cancers of the breast, cervix, mouth, Prostate, Oesophageal, and Oral. 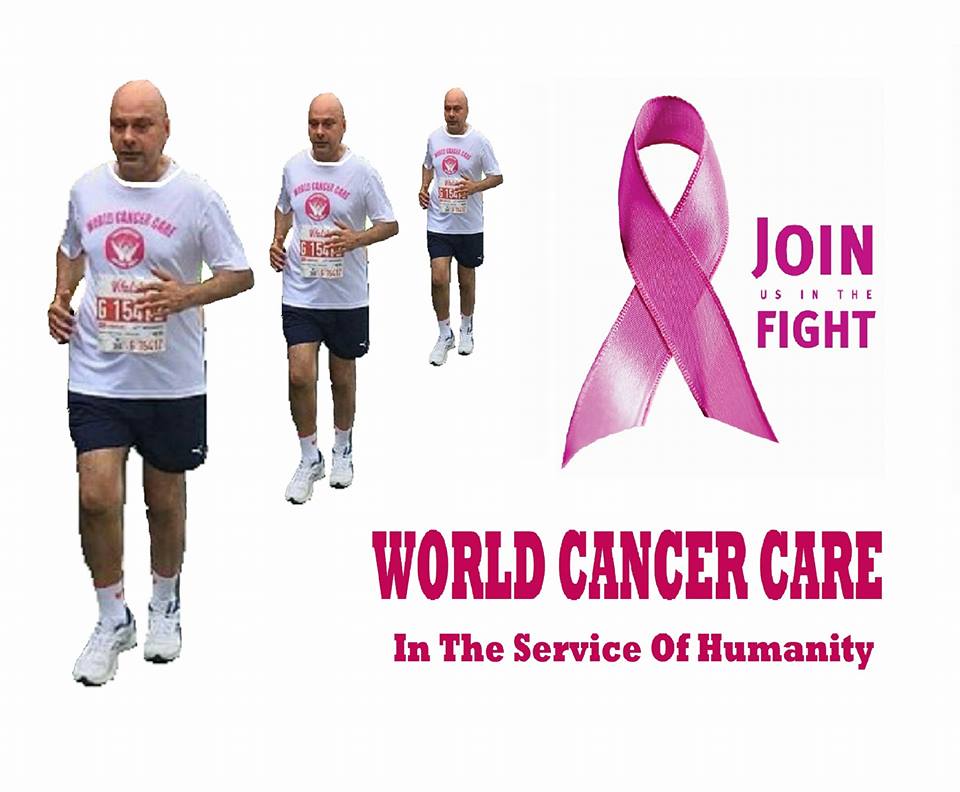 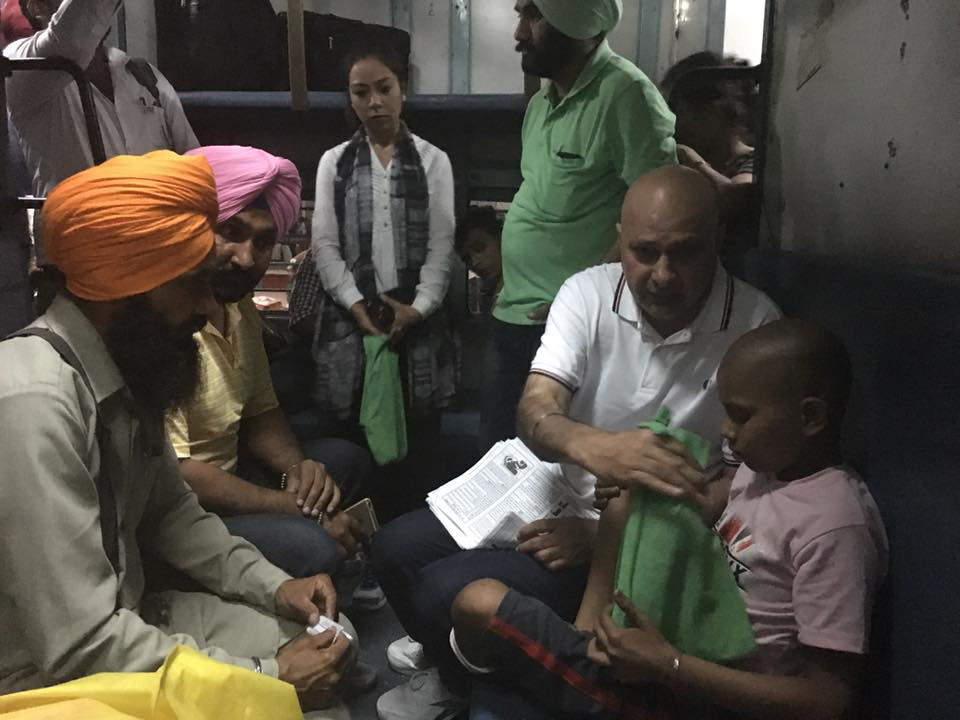 First time in the history of India is the case of Mr. Dhaliwal, a man running such a huge campaign on a mass scale. It is like a one-man Army fighting against the deadly evil of cancer.

He drove the initiative to implement policies that promoted & protected health, safety, and quality of life.

Cancer Care Charitable Society the only the First Charity in India who did Mega Cancer Screening Camps in all the Jails of Uttar Pradesh. Started supporting to Charity since 2014 and today the society covers close to 7400 villages of Punjab.

He has spread awareness about Cancer by free distribution of about 10 Million pamphlets having various Doctors statements on subjects related to cancer and environmental awareness.

You will be amazed to know that he has educated about One Lac students on Cancer subject through Cancer Care Campaign in various universities of Punjab, India. 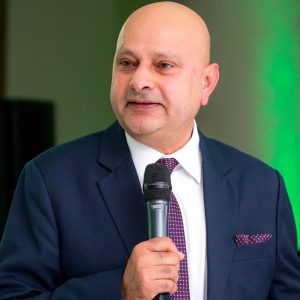 Dhaliwal has 39+ years’ rich experience in delivering optimal results & giving high-value to the society in the areas of ‘Social Responsibility & Humanitarian Service’.

He is the strong believer of the fact that “the biggest gift one can give is Education and Knowledge”.

In 2014,  he was appointed as the ‘Global Ambassador’ of registered charity ‘World Cancer Care’, after being recognized for his efforts and devotion to Eradicate Cancer.

Mr. Dhaliwal does not accept any remuneration for this appointment, in fact, the charity is still going on and has been a regular donor of charity above Rs. 8 Lacs per annum

He is highly accomplished, a resourceful, dynamic and versatile individual with solid domain knowledge and understanding of development research and studies focusing on social responsibility and initiatives.

He demonstrated strengths in devising and effectuating policies aimed at ensuring the smooth running of social projects encompassing development of the villages and facilitating cancer patients.

He got the proven expertise in executing and managing development programs in various capacities for development organizations and institutions in the areas of improving livelihoods, reducing female feticide, cancer eradication, the adolescent marriage of girls and lack of education resources and emergency relief.

He is the one who loves talking to cancer patients and sharing their stories.

Do you know that ‘World Cancer Care’ has come in public limelight under Mr. Kuwlant Singh Dhaliwal’s brand and marketing leadership through PR, talks in public gatherings, schools and places of worship; speeches and interviews to newspapers, radio, and TV channels attracting over 500 locals to each camp making them a success.

He has been supporting many Charities worldwide from the past over a decade.

Started walking for many charities in 2002 and continues walk 200 miles per month till now for raising fund for Cancer research. As a young man, decided to dedicate his life to the ‘selfless service of humanity’.

Accomplish responsibility for structuring proposal for proactive, responsive, transformative plans for direct implementation and studying all the proposals sent by NGOs for implementation of the projects within the community.

Since appointment, he has organized numerous camps across India reaching the smallest and the most remote villages to increase awareness and early detection of cancer when it is curable.

The camps now even cater to Breast, Cervix, Prostate, Oral cancer along with Blood Cancer and other forms of cancer that lead to over 85 percent of deaths in the state of Punjab, India.

He oversees the preparation and presentation of Policy on Resettlement and Rehabilitation (R&R) to stakeholders and Annual Social Responsibility plans.

He has been spreading western knowledge in India by using cancer educational and information material of the world’s renowned and highly effective British Health System – NHS, by translating them into different languages and distributing leaflets across India.

His biggest fear and mission is to save the next generation from the threat of cancer by investing in education and treatment instead of temples and places of worship. 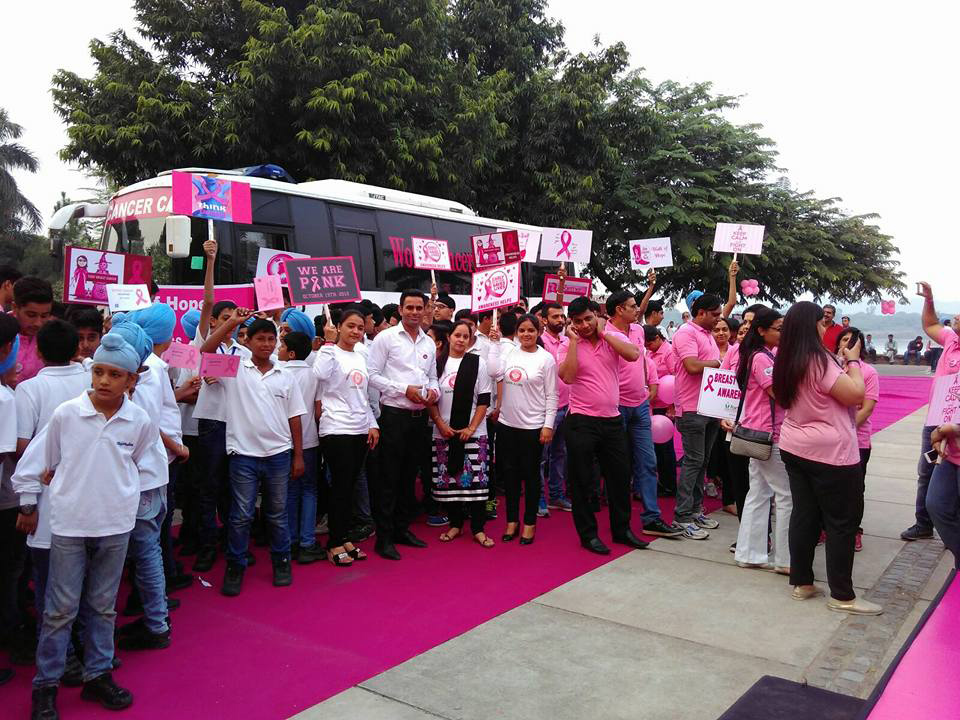 Mr. Dhaliwal has initiated various programs based on themes for the effective functioning of programs viz marathon’s.

He along with Mike Rudkin, MD, north-west region (UK) of the company manufacturing the Mercedes car, has reportedly collected one million pounds for cancer patients by walking from the western coastline to the eastern coastline of Great Britain in three days.

Earlier, in December 2009, Dhaliwal raised £1,00,000 for cancer patients by organizing a similar show at Manchester in the UK

Instead of taking donations, inspires individuals to sponsor camps directly by requesting them to deliver World Cancer Care camps to their respective villages.

He has been organizing ‘Charitable Walks’ every few months, on the same pattern as the recent ‘British 10K London Run’ on 14 July 2013 which brought his charitable work in the mainstream media limelight.

This article writing became possible with the notes sent by Mr. Kulwant Singh Dhaliwal and inputs from www.worldcancercare.co.in